Democrats VS Republicans – By The Numbers Over 50 Years 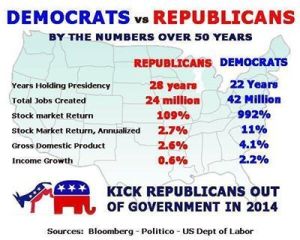 Pretty much blows holes in Republican economic positions. Primarily financed by for-profit corporations whose only interest is to make money, Republicans have been fighting for less government, lower taxes (primarily for corporations and the wealthy), and fewer regulations on businesses, claiming that their positions on these issues would stimulate the economy so all Americans would prosper (the “trickle down theory”).