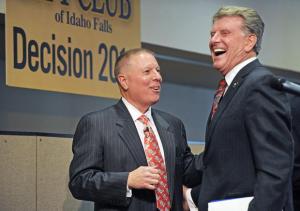 Idaho’s top political sage, retired professor Jim Weatherby, says that Otter’s new ad with a direct response to his Democratic challenger and the private prison scandal is evidence that the race for Idaho governor appears to be tightening as it enters its final week.

The key question Idaho Gov. Butch Otter faces is whether tea party and libertarian Republicans will vote to give him a third term. How he gets through the Idaho Public Television debate with Democratic Boise businessman A.J. Balukoff and former Canyon County Prosecutor John Bujak Thursday at 7 p.m. could be decisive.

In its endorsement editorial Sunday, the Idaho Press-Tribune made the case for Otter.

“Otter hasn’t always been in perfect harmony with his fellow Republicans at the Statehouse, but in his first two terms he has been a grounded, realistic, pragmatic governor who has, for the most part, handled competing interests and unenviable demands about as well as anyone could,” its editors wrote. “He has shown the political courage to buck the majority of his own party when he believed it would benefit the state and risk the political consequences, and if he’s re-elected — and he should be — he’ll need to show more of that spirit.”

But the Twin Falls Times-News made the case for Balukoff in its endorsement Sunday.

“A.J. Balukoff isn’t perfect. But the Boise Democrat is best suited to run a state in recovery,” the Times-News editors wrote. “Butch Otter was a governor for a recession whose time has passed.”

Thursday’s debate, sponsored by the League of Women Voters, the Idaho Press Club, Idaho Public Television and Boise State University, comes after two face-to-face debates between Otter and Balukoff that aired their differences over education and economics.

The issue of Idaho’s private prison has generated more questions, with Balukoff criticizing Otter’s handling of Corrections Corporation of America’s staffing and billing scandal, and the state’s $1 million civil settlement with the private prison company.

Balukoff called the settlement a “sweetheart deal,” that allowed CCA to pay millions less than it might have owed for falsified staffing records given to the state, violating its $29 million annual contract. Otter said he had recused himself personally from the settlement, leaving negotiations to the Idaho Department of Corrections and his staff.

In an ad last week, Otter said Balukoff distorted the facts but did not dispute directly Balukoff’s charges. Otter said he acted in the interest of the state by calling for an audit, an investigation and would ensure CCA was held accountable.

“I stand behind my response to this situation to be a good fiduciary of the state while ensuring public safety and the well-being of the inmates,” Otter said in a press release from his campaign.

The Press-Tribune ignored the CCA scandal in its Otter endorsement. But the Times-News said it wasn’t buying Otter’s account.

“By all appearances, Otter was instrumental in quashing a criminal investigation of CCA’s allegedly inhumane and illegal prison management,” Times-News editors wrote. “Otter pledged he had nothing to do with the repayment that got CCA out of Idaho. But his top advisers were directly involved, it was reported (by the Idaho Statesman) last week.

“Otter admitted to us he was regularly briefed on the negotiations but continued to claim he had no sway in crafting the agreement,” they wrote.

How much voters believe Otter’s account of his handling of the CCA scandal is probably critical to Balukoff’s chances of overcoming the great disadvantage he has running as a little-known Democrat against the well-known Otter. Whether Otter wins or loses a week from Tuesday, the CCA issue will remain.