Esto es tu Poder (This is Your Power) 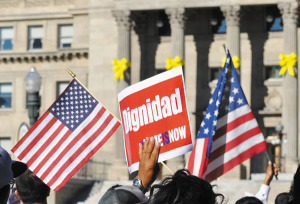 FROM THE BOISE WEEKLY
September 17, 2014
By Harrison Berry –

According to the Pew Research Center’s Hispanic Trends Project, the median age of an Idaho Latino was 22 years old in 2011. Estefania Mondragon comes very close; she’s the treasurer for the Idaho Democratic Latino Caucus and is 23 years old. She says she has been politically active–beginning with campus clubs, volunteer work and, finally, paid positions as a political operative–for five years.

“I think it’s very interesting to see how we’re growing up and becoming politically active. A lot of people are becoming more politically active and they see these injustices,” she said, referring to the maze that is the U.S. immigration system. She’s also quick to point to high dropout rates among Latinos and what she calls Idaho’s resistance to accepting federal money to expand its Medicaid program. Now, Mondragon said, is a time for action.