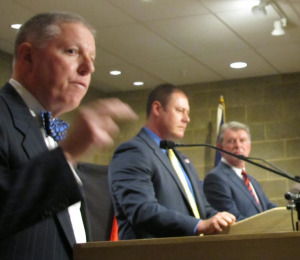 In last night’s heated debate between the three leading candidates for governor of Idaho, there was much back-and-forth over the Corrections Corporation of America and the state’s $1 million settlement with the firm for understaffing the state’s largest prison and over-billing the state. Here’s a fact-check on some of the disputed points the candidates raised:

SETTLEMENT AMOUNT: Gov. Butch Otter said the settlement was for $1.3 million, not $1 million. You can see the settlement here. On Page 1 of the nine-page settlement, under “Release and Discharge,” it says, “In consideration of the sum of ONE MILLION DOLLARS AND 00/100 ($1,000,000), paid by CCA, the receipt and sufficiency of which Releasor acknowledges … Releasor does hereby fully, forever, irrevocably, and unconditionally release, acquit, and forever discharge Releasee from any and all claims … of any kind, whether known or unknown, suspected or unsuspected … arising out of the staffing of the ICC and existing on or before the date of this Settlement Agreement.”

Asked about the $1 million settlement during the debate, Otter said, “No, that was not the amount. … It was well in excess of a million dollars. … In fact, there was a bill outstanding for over $300,000 that was also part of the final negotiations.”

BOTTOM LINE: That denial of the inflationary increase isn’t mentioned in the signed settlement, though it may have been a part of the negotiations.

“OFF THE HOOK”: A.J. Balukoff, the Democratic candidate for the governor, said during the debate, “The governor just admitted he doesn’t know if $1.3 million was a fair settlement or not. It seems like it’s prudent to do the investigation and understand what went on before you let a company off the hook.”

Otter responded, “A.J. knows different. A.J. knows if he’s done his homework, he knows that that contract is not final. That negotiation is not final. … If the FBI comes up with something, then all bets are off.”

“No, they’re not,” Balukoff responded. Otter said, “The criminal can go forward for anything else that’s found out.” Balukoff said, “That agreement and forgiveness of civil penalties does not go away.” Otter snapped back, “That’s not true.”

BOTTOM LINE: The exact wording from the settlement is, “The Parties desire to finally and fully resolve all disputed claims arising out of the staffing discrepancies.”